It’s been a while since my last update but there has been progress. A friend who is looking for something to do this summer is considering doing a bit of game development. We had some drinks and pitched ideas to each other, then we worked a bit on our projects. He is getting into Famitracker and I made an avatar for the player in S&D. I have been approaching some friends regarding desiging music and audio for the game, since I’m not very skilled at this myself, however if he has the time I think some 8-bit chiptune could fit the game.

After that session I also made some new dice for the game, d1 to d6. I tried using Blender but I still can’t get my head around its interface. After a die or two I went back to my old favorite, SketchUp. I have tried TinkerCAD and 123D as well, but online tools just aren’t that reliable and 123D still seems like a poor man’s SketchUp to me. 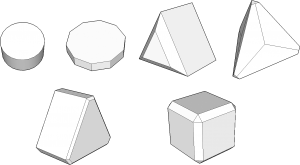